What is the best way forward with answers that are severely edited; to the point where they no longer hold their original intent? In specific, I'm referencing this post: 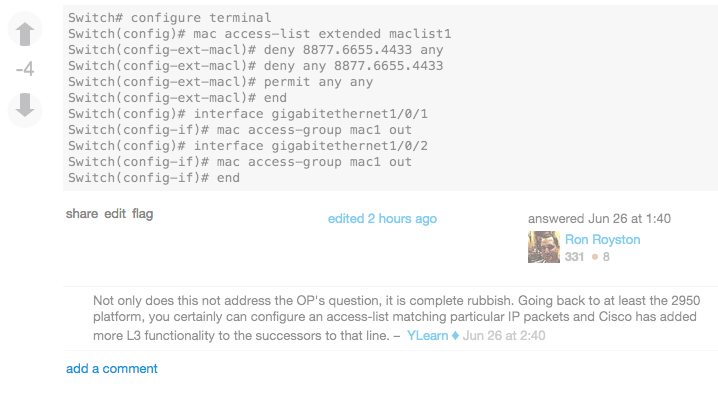 It's signaling the wrong thing to the community, but it's also saying the same thing as what YLearn posted (which has a positive vote talley). On the surface, it appears that YLearn is also saying that this is totally wrong, but after further inspection, the answer has totally backpedalled.

Would the best course of action be to delete the original answer and post a new one? Does that responsibility fall on the person posting, or the community (since it's conveying a confusing message)?

I think it's very hard for the community to handle this properly. You can't expect every voter to review his or her voting decision (up or down) after every edit, it just won't happen. The smart thing to do in this case is for the poster not to change a reply so dramatically, but just delete the old answer and post a new one.

Actually, as I read the original question, the intent was to match a MAC within an L2TP payload. If that's the case, then Royston's original answer is 100% correct; there's no ACL language to look into the payload of a frame. As such, his edit merely looks like he's trying to copy-cat a positively voted answer.

Verdict: rollback to his original answer, lock if necessary to prevent further "wander edits" (as a last resort)

[Warning: Royston will absolutely flip out over this.]

[edit, to be clear]
Edits should not substantively change an answer. In such cases, one should delete an errant answer, and provide a different one. A downvoted "wrong" answer turned into a "right" answer would still have the downvotes counting against it, making it harder to float to the top as a good answer. (I'm sure that's documented somewhere on SE)

Not the answer you're looking for? Browse other questions tagged discussion down-votes .

31
Network Engineering Question Checklist
10
Being a more open community?
5
Stepping down from being a NetEng Moderator
11
Disagree with what is on/off topic here? Join the discussion! Community feedback needed
3
Can we err more on the side of leaving questions open when multiple interpretations exist and some might be off topic/too broad?
1
I think "ICMP No Reply Found Issue" should have been on-topic
8
Network Engineering is not a welcoming place